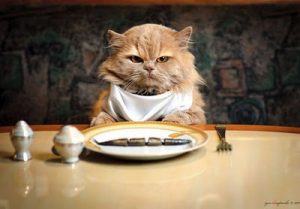 Why Does My Cat Eat Human Food?

A majority of cats are quite happy and content with their daily fare of dry and wet cat food. Some don’t even like any radical change to their diet. But there is a portion of the cat population that are connoisseurs of human food and they feel it is their duty to sample the food and pass judgement.  Mind you, some cats can be more critical than Gordon Ramsay! I have a cat who sniffs my food and walks away without saying anything. I couldn’t help but wonder does she know something I don’t? If this food is not good enough for her, should I continue to eat it? Cats are mysterious creatures, they keep us constantly reading between the lines of their actions.

They are just curious by nature. Especially kittens! They explore the world with their five senses including taste. Often, they want to know what you are cooking in the kitchen and what you are eating at the dining table. They just have to jump up and see and taste the food. Some cats grow out of this curious stage. Others, though, come to decide that human food taste better than their cat food and they become hooked.

Cats are, in some ways, like human children too. Since you are their pet parent, they want to imitate you and participate in what you are doing including eating what you eat! And like human children, if they haven’t been trained yet to not touch human food, they cannot resist the temptation to sample any food you leave unattended, any scraps left on your plate which you did not throw away or keep immediately.

Cats know when you’re spoiling them

I consider my cats not as mere pets but as part of the family. Some cat parents, however, take this to a higher level by letting their cats join them during mealtimes and eat what the family eats. After all, the family that eats together stays together, right? This can result to the cat becoming spoiled, preferring to eat the more yummy human food over her cat food.  In the worst cases, a spoiled cat would even attempt to steal food from their human’s hand. Same thing may happen when you spoil cats by giving them “treats” from what you are eating.

Most Abandoned Cats Got By On Human Food

I have rescued and adopted a number of kittens left abandoned at the roadsides and it breaks my heart to see how hungry they always seem to be even when I know they’re full. They are left to look for food by themselves while they are still very small and very young and they have survived on scavenging for leftover human food in the trash bins. They prefer to eat human food over cat food because that was the only kind of food they knew. I had raised a kitten who attempts to steal from my plate or from the trash even if he has a full bowl of cat food left for him. It was difficult to break him from his habit but I gave him some slack and more patience because of what he had been through. He eventually learned that stealing food is not good.

What Can I Do To Stop My Cat From Eating (or Stealing!) Human Food?

In general, there are a number of human foods that are considered safe for the cat to eat as long as they do not eat too much of it and it only represents a low percentage of their daily food intake. Talk with your veterinarian as to which human food is safe for your cat and which are not. I am not averse to allowing my cats to eat human food from time to time,  just not on top of tables and when I am eating. I have some suggestions on how to prevent your cat from preferring human over her cat food. Also on how to break the habit if she has it already.

If you notice, however, that aside from an obsession for human food, your cat develops a ravenous appetite for her cat food and even for non-food items (pica) and exhibits an overly clingy, attention-seeking behaviour, take her to the veterinarian for a check-up. There is a documented condition in cats called Psychogenic Abnormal Feeding Behaviour described in a veterinary behaviour journal. Cats having this condition exhibit food-related aggression wolfs down his food and steals the food of the other household cats and even the human’s food. Have the veterinarian test the cat for metabolic and endocrine disorders like hyperthyroidism and diabetes mellitus which makes the cat exhibit the same signs of ravenous appetite. If she is found to have a metabolic or endocrine disorder, she can be treated for it. She might be cleared of these conditions in which case the condition could be psychological in origin and the veterinarian can give you advise on behaviour modification exercises.
If you found this page useful you may also want to look at improving your cat’s drinking habits. We would advise you to get some form of water fountain for your pet to encourage it to stay hydrated. You can look into getting this product or simply just reading more about its benefits by clicking here.