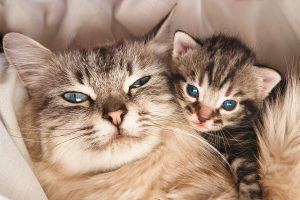 Your cat is pregnant and you need more information? Look down for questions and answers. Here’s a list of frequently asked questions about pregnancy and cats: And here are the answers…

1.Is it true that cats are in heat in late spring and midsummer only? No, there is no such thing as a mating season. Some cats are in heat three, four and sometimes even five times a year, others only two times. However, it’s true that many cats are in heat in spring and summer, but you’re never sure about this. 2.Does a queen bleed when she’s in heat, like dogs do? No. A female cat does not bleed when she’s in heat. If she bleeds shortly after a heat cycle it could mean she has a miscarriage. 3.How can you tell if a cat is pregnant? Her nipples become pink about three weeks after mating. This is most visible the first time a cat is pregnant. From that moment it will take six weeks before the kittens arrive. 4.How long does pregnancy in cats last? A cat is pregnant for about 65 days. A variation of four days either way is not unusual, so the whole cat gestation period may be as short as 61 days or as long as 69. 5.Can a feline have more than one father per litter? Yes, this is possible – although it is rare. A queen in heat releases her eggs about 24 hours after mating. Theoretically all sperms that have entered her the past day can fertilize each egg. If she mated with more than one cat within these 24 hours, there can be two (and even three or four) different fathers. 6.How old does a cat have to be before she can get pregnant? Physically many cats are able to get pregnant when they are only six or seven months old. Others however are one year old when they have their first heat cycle. So it depends on your cat. While the moment of the first heat cycle varies, it is better to breed when they’re a little older. It is known that many younger cats are not always good as a mother; their maternal instinct seems to be better developed when they’re one year or older. Think about this when you decide to breed. 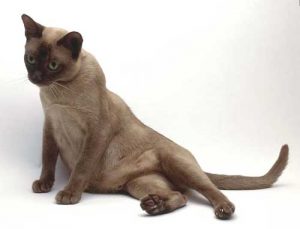 7.How soon after giving birth can a cat become pregnant again? She can get pregnant again anytime – it’s not unusual that cats come into heat a few days after giving birth. However, it’s best to not have her spayed before her kittens have switched to solid food, which should be after eight weeks or so. Until then, keep the mother cat indoors, and away from any noncastrated tom cat. That’s the best way to prevent another litter, apart from spaying. 8.My pregnant cat has worms. What should I do? Generally you shouldn’t use medicines in pregnant cats, so I don’t recommend deworming during pregnancy – there’s always a risk involved. On the other hand, NOT deworming is likely to have serious effects on mom and kittens. Mother cats with intestinal worms can pass worms on to the kittens through the womb (and later milk). Some deworming products are safe to use in pregnant cats up to two weeks before birth. Usually this is mentioned in the product description. So… Treatment does not have to be harmful, but it depends on the product and the stage of pregnancy. If possible, ask your vet for advice before you buy deworming tabs when your cat is pregnant. 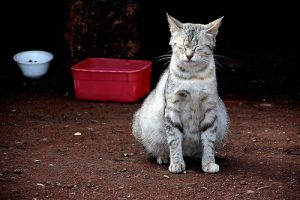 9.I have two cats, one male and one female. The female cat is pregnant, but the male is not the father. Will he attack the kittens once they’re born? The male won’t know or be bothered if he’s not the father. Although serious problems are unusual, it does happen that other cats (male AND female) react aggressively towards kittens. The mother will do her best to defend her litter. To avoid a fight, when you go out you should never leave the other cat in the same room as the mother and the litter. Also, make sure you are there when the male cat meets the kittens for the first time, and watch how it goes – only interfere if it’s getting out of hand.