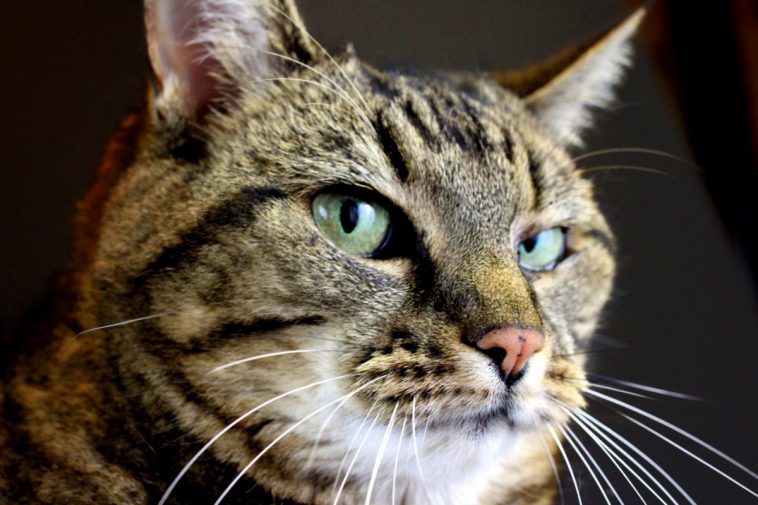 One of the most unmistakable things you are soon to find out as cat parents is that these pets can misbehave too. Not just the occasional wrongdoing that is common to all creatures, but outright misbehaving. There are some of these behaviours that will be deemed cute – one of such is a cat that constantly meows to get your attention or does other stuff. However, some others are plain annoying. How to get out of this situation? Discipline your cat. That could be a surprising revelation to you. If you didn’t know before now, you can discipline your cat to conform to the behavioural patterns you had in mind. However, there is one thing we want you to note before going forward. ‘Discipline’ here is not synonymous to punishment. Rather, it can be better linked to social reconfiguration. If little feline has been showing some traits that you can’t put up with no more, we’ve got one or two suggestions on how to get that out of them.

Why Do Cats Misbehave?

Most times, what you see as your cat misbehaving is just them expressing their natural inhibitions as animals. That is why it is not advisable to punish them for what nature has made them when you could help them adjust instead. At other times though, the cat has just picked up a bad behaviour from nowhere and started to run with the idea. Some of the fault might even have been on your part as to not having nipped the behaviour in the bud earlier. This is not a blame game though. Depending on what is making your cat misbehave, you will want to approach the discipline with utmost care and patience. Trust us, you’ll need loads of patience.

There are different cat misbehaviors out there. While some are general to most cats, others are specific bad behaviors picked up by the kitty at one point or the other in their lives. Generally, a majority of these bad behaviours fall under 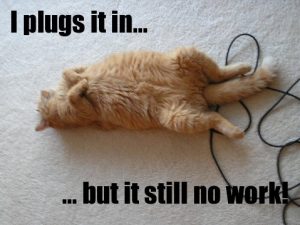 As well as being extremely annoying for pet owners, chewing wires can seriously harm their animals.

• Jumping on counters • Chewing of wires around the house • Scratching household items – Household furniture suffers the most for this in most scenarios • Biting – Sometimes your cat will determine it is a fun thing to bite you. They are not doing this nearly as much as they would when they are attacking prey, but it hurts nonetheless. • ‘Gifts’ – Has your cat started bringing home little dead animals to you? You are not alone • Play – Cats sleep for more than 14 hours every day. The worst part is that they don’t have a timetable for sleeping and waking up. That means they could wake up and be active just when you are about to sleep. We don’t need to tell you that such an occurrence will leave one party frustrated – and it won’t be the cat.

How to Discipline Your Cat

You must have been fed up with all of Kitty’s antics. Having looked at some of the best methods that work to discipline your cat, we can tell you that they are all based on one principle: cause and effect. The cat needs to associate an unpleasant happening with what they are doing. Once that is done, they wouldn’t want such unpleasantries anymore. Thus, they’ll naturally stop doing what you want to get them to stop. That being said, here are some of the things you might as well do.

When your cat is doing something you don’t like, simply using your voice to stop them might be enough. Have a stop word in mind and use that for the cat whenever it’s in the bad behavior zone. A simple ‘No’ or ‘Hey’ said in a loud, firm voice will get the job done. The key to making this work is consistency. When you have started using a stop word, stick to it so long, the cat starts associating that word with bad behavior it needs to quit. 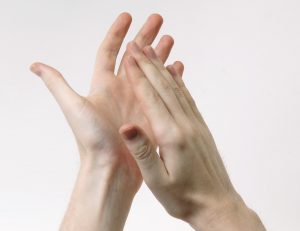 Another thing you can do to get a cat to desist from misbehaving is clap your hands. Such a sudden, loud noise that comes from a clapping of hands will be irritating/ unsettling to cat and it many causes them to stop. Some cats are easily startled too. Clapping your hands together will give them a jolt. Repeat that for a while and they associate what they were doing (which is bad behavior) with the unsettling sound of your claps

This one is particularly useful for cats that like to climb on top of cabinets and other platforms. You can also use it when you want to stop your cat from snooping around some places. Likewise, it works when you want to keep the cat away from household plants Get some empty soda cans and arrange them, one on top of the other, such that minimal contact causes them all to wobble. The first time your cat makes an approach and causes them to wobble, the noise will be enough to chase it away. Don’t forget to repeat this exercise 2 – 3 more times till the cat gets the message. For the most stubborn cats, you won’t need to do this more than five times.

Some cats will not have anything to do with citrus to save even their own lives. Some others dislike pepper flakes for some reason. Guess where that puts us? At an advantage. There are commercially available sprays for these smells which you can purchase and use around the places where you don’t want to see the cat. If your cat is one that likes to chew things, you can find some (harmless) sprays that makes such things taste bad too.

5 Play with the Cat

A bored cat is a disaster waiting to happen. If you aren’t playing with your cat much, you could be the source of its misbehavior. If your cat is one that likes to run around the house, chase things, swipe at your leg while you pass by and so on, somebody is not getting enough play time. Another example that we feel worthy of mention here is that of older cats and biting. When this happens, it is usually as a result of insecurity and/ or confusion in the cat. You can correct this behavior by buying some toys for the cat. Get it a cat furniture for scratching and a swing for playing when you are not around. Anything to take all that extra energy off is welcome.

When the cat does something bad, give it a time out. Designate a place in the home to serve as the cat’s jail. It is preferable to use your bathroom. Whenever they do something bad, pick them up immediately and put them in the bathroom for about 20 minutes to half an hour.

7 Use a Spray Bottle 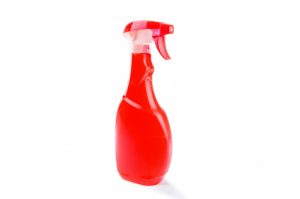 You could use a spray bottle to help discipline your cat.

Nobody likes to be sprayed with water. Even cats. Get a spray bottle and squirt the cat with water whenever they are doing something bad. The rule of thumb with this correctional method is that you must never let the cat know that the water is coming from you. Otherwise, they will associate the sprayed water with you and not with their bad behavior.

It might sound funny but one of the ways to discipline a cat is to reward them when they do something right. The reasoning behind this is that the cat will associate the good behavior with getting a treat. Since it wants more treats, it starts doing more of the good things. We don’t suppose a cat busy doing good will have so much time left to do bad, don’t you think?

As absurd as that might sound, the discipline your cat needs could be as simple as paying the vet a visit. When at the vet’s, run a full medical checkup on the cat. That will eliminate the possibility of there being some underlying medical conditions that is making your cat that aggressive/ misbehaving being it has turned out to be. 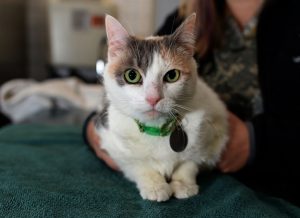 Take your cat to the vet if he is acting out, as it could be due to pain.

More often than not, cats could be suffering from undetected wounds, imbalances in their hormones, distress, roundworm, flukes and tapeworm (from mites, fleas, wormer, etc.), and psychological disorders, to mention but a few, that you won’t even have the slightest hint about. As soon as the vet makes a call, you’ll be better advised on what next to do.

10 Look at the Cat’s Diet/ Medication

Before you play the discipline card, have you recently changed your cat’s dietary plan? Altered some ingredients? Switched to a new supplier? Maybe it is even on some medications and all of a sudden, started displaying some strange traits. For example has he just been castrated? For the latter, speak to a vet and ask them for possible side effects of the said medication. Let them know what you are experiencing and ask if its normal, given the drugs they are on. If its food, try to change to the brand/ style/ ingredients they were comfortable with and see if the problem goes away. Similarly, he could be extremely dehydrated and subsequently falling ill. Check out our Miaustore cat fountain to see if this could encourage a more healthy state of hydration for your feline.

What Not to Do

As there is a list of possible things to do, so is there a collection of things you should never do when you discipline your cat.

Getting physical with the cat and hurting it won’t solve any problems. In fact, you would be creating one for yourself as the cat will no longer trust itself to be safe around you.

If you’ll discipline your cat for their behaviour (time out, spraying, etc.), it has to be immediately they do something bad. Unlike humans, you don’t expect the cat to remember what it did wrong that you are now meting out the punishment for.

Humans can be told that what they are doing is wrong, and punishments can be meted out to them on that basis. Cats can’t be told stuff like that so you can only get to them via associations. Now, where your disciplinary measures could turn counterproductive is when you don’t exercise consistency in discipline. If you saw a cat chewing some cords and you shouted a firm ‘No’ at it today, then allowed it freedom to play with the wires tomorrow, you would have achieved nothing. If anything, you’ll have confused the cat even more.

Some are of the opinion that a misbehaving cat might be trying to get your attention. The flaw in that theory is, what if its not and the cat’s mind has just gone AWOL? Leaving bad behavior to continue for long just makes it harder to control when you finally get to it. Taking a leaf from the big book of English proverbs, a stitch in time does save nine

There is no one way to correcting bad behavior in cats. With the proper investigation of the root of the problem and type of it though, patience is the only other thing you need to get results. Therefore it is possible to discipline your cat, however you must work out the most effective way depending on his behaviour faults. Does your cat also have some weird behaviors you’d like corrected? Perhaps you have been successful in training your cat back to the good ways after it went ‘’wild’ once. Let’s hear all about it in the comments then.