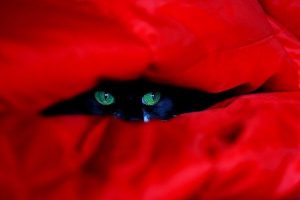 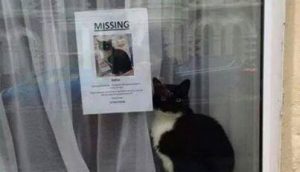 My cat disappeared in my house… Again!

Cats are lovely but frustrating pets. It has been a few days since my cat disappeared in my house, but I have no doubt it will happen again soon. Have you ever felt that feeling that you wanted to strangle someone you love so dearly? I have. Many times. I am sure all cat parents have too! If you are a cat parent and you haven’t felt the urge to strangle your cat then it’s either: (1) you are a very patient and forgiving person, (2) you haven’t had your cat for that long, and (3) your cat is a very good cat, a one in a million cat. 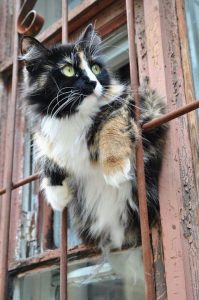 Many times I have come across sayings that go “Cats are good for your heart” and I am thinking “What in the world is the person who wrote this talking about? Good for the heart? My cats give me a mini heart attack every time one of them decides to go missing!” It doesn’t matter if I know the windows and doors are closed because there is always that remote possibility that the cat was able to sneak out through the smallest of openings. After the realisation that my cat disappeared in my house, my first order of business is to check that all the openings to the outside are secure. After that I begin the process of looking for the cat. “How hard can that be?” says a non-cat person and I stare at him in disbelief for even asking that question!

How To Find Your Missing Cat

My cat-finding process begins by trying to coax him out from where he is hiding with food. I open noisily a can of cat food and I jiggle a bag of cat treats. Usually this works. But tough luck when your cat decided to vanish just after you have fed him and he is not hungry. 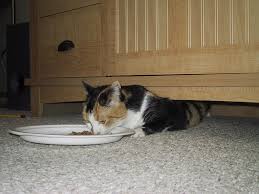 Coax cat out from hiding place with food bribe.

My next “lure” is turning on the air conditioner. I discovered by accident that this works, but not always. Previously when I had been looking for my cat for ages with no luck finding him, I was feeling hot and sweaty so I decided to turn on the air conditioner and…Viola! The missing cat appears out of nowhere in front of the stream of cool air coming from the air conditioner! This trick doesn’t work though when the weather is cool. 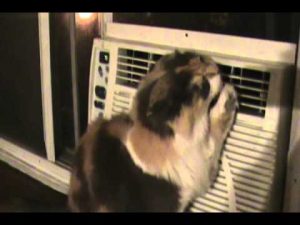 Turning on the air conditioning unit helped me find my boy!

If the two lures do not work, then I begin the tedious room-to-room, grid-by-grid, inch-by-inch search of the cat. This may sound like military precision work. Usually those who have never had a missing cat usually don’t believe this method can fail. However any cat owner who has experienced searching for a missing cat in a finite space knows that even a method this precise can be unsuccessful! Armed with broom and flashlight, I begin the search. Flashlights are very handy, obviously, when looking in dark and hard to reach places. The flashlight also gives you an added advantage because a cat’s eyes have a structure called the tapetum lucidum which is very reflective to light. Many cats have been found by only the faint glint from their eye as light is reflected on them. 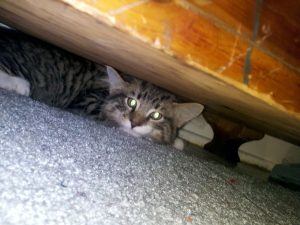 KItty’s reflective eyes may come in handy in finding her.

Then if you do not find your cat in the obvious hideouts, try the not-so-probable-but-just-maybe hiding spots

And even in refrigerator

If still no luck finding your cat, remember that they are the masters of blending in 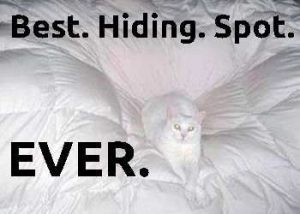 He could be just right under your nose, too obvious that you can’t see him

Think creative, look in places you would think a cat will never fit! 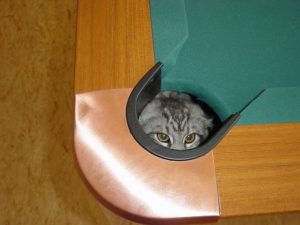 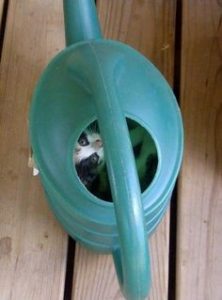 If you cannot find him on ground level, look up…

he may be on the curtain rods, beams, on top of the cabinets and tall appliances. This list of places to search can go on and on.

If all else fails…

If you still cannot find him, pause for a moment and think like your cat and try to figure out where he is most probably hiding. I have read one suggestion that said, “If all fails, sprinkle catnip out in the centre of each room, turn off the lights, burn a nightlight and wait.” I have not yet reached this point and tried this method. It is comforting to know that there is still one method left to try in case all others fail. The only problem with cats that disappeared in the house is in case they have hurt themselves. Cats are stoic creatures who usually withdraw and hide when they are hurt or not feeling well. This is why it is important to look for and find the cat even if you are sure that he is just inside the house. It also helps to have items that’s cats always use, such as a noisy toy to coax it out, or even a water fountain for cats, items such as these which are always used by your feline, intermittently or periodically. Either naturally or through routine your cat should come out to the sound of them

Why Does He Love Tormenting His Human By Disappearing?

I think it’s a cat’s pastime and they actually love watching their humans make fools of themselves looking for them. Most of these cats that disappear are perfectly awake and can hear us calling out for them which they take pleasure in ignoring. I can forgive a cat who is asleep, but even then the cat is one of those animals with the most acute sense of hearing! They can hear a can of cat food being opened when they seem asleep and they wake up in two seconds exactly. Obviously this disappearing act is just the cat having some fun at our expense. He may even be playing a game in his head of “Where will she look next?” The most irritating part is that after putting you through hell, they just give you that look that says “What?” Not even an “I am sorry Mommy I put you through that misery.” However, the plus side about this game is that, while looking for the cat, I have found many missing items in the process like ballpoint pens. I even found some cash.

As mentioned above, in some cases the disappearing act is not a game and your cat may actually be in pain or is sick, especially if your cat never leaves you alone usually. It is worth to mention that one of the first places you must look for a missing cat is in the litterbox. Some cats with lower urinary tract diseases spend most if not all of their time squatting inside the litterbox. I had a cat who would always be the first one to arrive when food is placed on the bowls. One day he did not show up and after looking for him for a few minutes I found him with his eyes closed squatting inside the litterbox. When I took him out to show him his food, he ignored it and went back to the litterbox. It was a good thing that his urinary problem was caught early. That was 9 years ago and he is today my most senior cat. So never be complacent into saying it’s ok because the cat is just somewhere in the house he will eventually show up. Always look for the missing cat because he might be in real trouble.

Proactive Things Pet Parents Can Do Before A Cat Goes Missing

I was thinking having my cat wear one of those harnesses with a backpack where a small cellphone can fit and I can just make the cellphone ring when he goes missing…but then that is not such a good idea. A house is a finite space. At least if you are sure the cat is just somewhere inside the house then that should not be a problem even if it takes you two days to find him. The problem is when the cat is able to escape outside through an opening. The following are good ideas to increase your chances of finding him just in case he got out: (1) Have your cat microchipped and always update the information stored in the microchip. (2) Having your cat wear a collar with a tag bearing his name and your contact number may be helpful if you live in an area where microchipping is not yet common. But some cats are averse to wearing collars and I personally do not feel it safe leaving my cat in the house alone with a collar on as it might get snagged onto something and he might get strangled. But in the absence of a microchip, the collar is the next best thing. (3) While no one ever wishes for anyone’s pet to go missing, it is wise to prepare a lost cat poster in advance and store it so just in case your cat goes missing and maybe has escaped outside, you can just have it reproduced immediately and not waste precious time you could otherwise use looking for him. These simple steps can go a long way and spell the difference between finding your little furbaby and losing him forever in case he gets out.