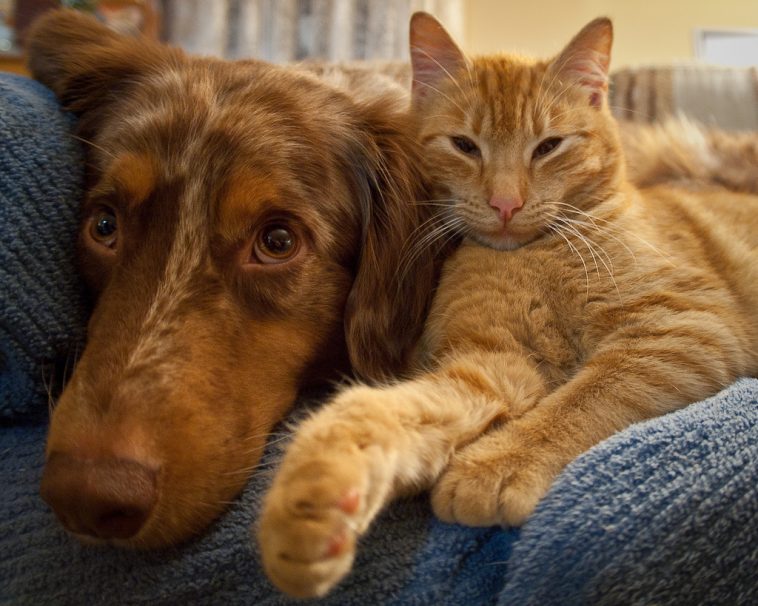 I have a dog called Bailey. He’s a lurcher, which is a crossbreed of the “sighthound” type. Sighthounds tend to be popular due to their ability to run fast (greyhounds are sighthounds), but their stoicism is less attractive. Bailey is no exception. He runs like the wind, and he screams his head off if you dry his paws too roughly after a walk, or if you touch his ears in the wrong spot. I’ve never heard him make quite such a fuss, however, as he did the time my neighbour’s cat swiped him across the nose. We were walking and a jet-black cat darted out of nowhere and flicked a front paw at Bailey’s face. Bailey was left with a rather impressive scratch on his nose. As a result my dog is scared of cats! 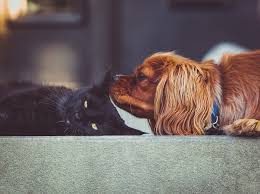 When we’re out walking, and he catches sight of a cat, Bailey becomes desperate to show off his ferocity, presumably with the aim of discouraging any repeat of the attack he suffered in the past. He barks, growls and pulls at the lead, while the cat invariably sits or stands perfectly still, eyeing him with disdain. It’s profoundly embarrassing, but I deal with it by keeping Bailey under close control when we are out. Around houses and gardens, where cat encounters are most likely, I keep him on the lead. Away from houses, when he is off the lead, I keep recalling him to my side, trying to reduce the chance of him spotting a cat in the distance before I do. I expect that if he did come face to face with a cat when off the lead, the same situation will occur again, but I’ve no desire to test my theory out. For me personally, as my dog is scared of cats it’s easiest for me to simply keep Bailey away from them.

Cats and Dogs in the Same Home

I am able to work around why my dog is scared of cats in this way, because I don’t have a cat in my home at present. But what if you have a dog who fears your own cat? Of course, cats and dogs can live perfectly happily together. A friend of mine even has a cat who follows her when she takes the dogs for a walk. It doesn’t always work out like that though, and with good reason. John Gray demonstrates, in his famous 90s book, “Men are from Mars, Women are from Venus”, just how difficult it can be for members of the same species to communicate with each other. Cats and dogs, however, are different species, in fact they are from completely distinct biological families. Cats are part of the family, “Felidae”, which also contains cheetahs, lions, tigers and leopards. Dogs, on the other hand, are part of the “Canidae” family, along with wolves, coyotes, foxes and jackals. It’s no surprise, then, that cats and dogs “speak” different languages.

Why my Dog is Scared of Cats – Communication Issues 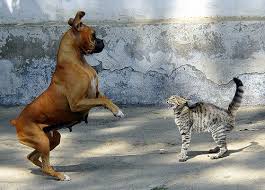 We are not born knowing how to understand any language. It’s a skill we have to learn. The same applies to understanding the signals our pets use to communicate with us. One of the first things I taught my children about our cat, when they were young, was that if she wagged her tail, it didn’t mean she was happy. A cat wagging her tail is likely to be tense and ready to spring. This is knowledge that can be really rather useful for a child. A wagging tail is a signal that it is probably time to leave the cat alone! This is a very simple example, but communications are a complex affair. For example, a dog who is wagging his tail isn’t necessarily happy either. He might actually be feeling a little apprehensive and making an effort to appease you.

If you are having problems with cats and dogs living together it is worthwhile seeking help from a animal behaviourist. Your vet will be able to put you in touch with one. An animal behaviourist can give you an insight into the meanings of your pets’ different behaviours. Perhaps your cat and dog will never understand each other very well, but a behaviourist might help. They train you to learn enough of their languages so that you can help them manage their relationship. A good animal behaviourist can make all the difference to your own relationships with your pets. They help you to understand what they are trying to tell you. Don’t hesitate getting a dog if you already have a cat, or vice versa. Its just very important to think carefully about how to make introductions. Your vet will be able to advise you on this, or direct you to reliable sources of information. You can also read some good advice about it on the website of Blue Cross, a pet charity.