My cat Kirina gave birth to five kittens, among them two boys both with the Siamese seal-point colour pattern. I named them Lestat and Louis from the two main characters in the novel Interview with the Vampire. I lovingly called them my Vampire Boys expecting them to grow up joined-at-the-hips best friends. It turned out they grew up to become polar opposites! Louis is the “typical” cat – aloof and prefers being by himself. When I arrive, Louis will only glance over to me and go back to what he was doing which is usually sleeping. Lestat, on the other hand, is the so-called “Velcro” cat – my stalker cat. The cat won’t leave me alone! 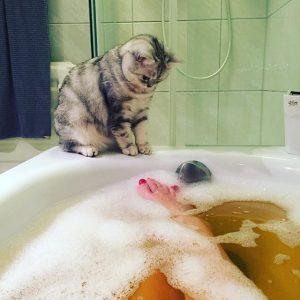 My Cat Won’t Leave Me Alone Because He Loves Me So Much… Or Could It Be Something Else?

People who do not live every day with one of these clingy, attention-craving cats would say “Awww, he is just showing you how much he loves you!” Yes, it can be cute and even flattering at times but it can also quickly become annoying. These clingy cats follow you around everywhere making you trip over them and when you’re sitting, they have to be in front or on top of you always. Many people who live with this situation exclaim, “My cat won’t leave me alone and I need it to stop!” First off, if this clingy behaviour just developed out of the blue, take your cat to the veterinarian for a check up to rule out any medical condition that may be causing your cat any physical discomfort or pain to trigger this sudden change in demeanour. If your cat is given a clean bill of health then the next thing to do is to identify if this being overly clingy is a manifestation of the cat being needy or is he being demanding? Although these two have common behaviour, their root causes are different therefore the approach in solving them are also different.

Is Your Cat Needy or Demanding? 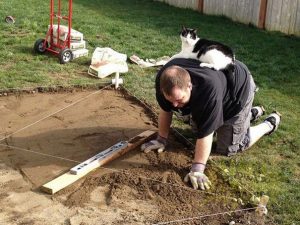 A needy cat follows you everywhere. You mean the whole world to him and he stares at you all the time. If you lock him out from the bedroom or the bathroom, he will cry mournfully until you let him in. An extreme manifestation of this neediness is when he will not eat when you are not around. A needy cat is an insecure cat with low self-confidence and very dependent on his human who he sees as his protector. This neediness may have stemmed from an emotionally rooted issue like being abandoned as a kitten or separated from its mother too early, or being the newest addition to the clowder and therefore a low position in the hierarchy. Being needy may also be a manifestation of anxiety due to any change within the household. A needy cat may also be telling you that he is bored so he needs you to be constantly around to keep him company. A demanding cat is one who, aside from shadowing you everywhere, is constantly screaming at you at the top of his lungs. He is meowing at you for food, treats, and attention. He has learned and is very confident that when he acts this way, you, his human will yield to his every wish. Make sure to check you do not give in to your cat’s demands every time. However it is important to remember that your pet should have a constant supply of water. If you don’t want to keep refilling a bowl then you should consider buying a fountain for the cat. 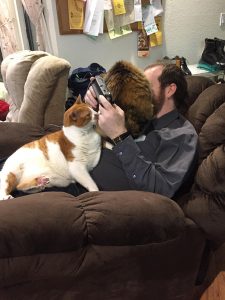 The strategy to prevent neediness is to “remove and reward” repetitively until he gets the idea. When cat plants himself in front of you or on top of your work, pick him up and place him where you want him to stay and if he stays there without jumping back up, reward him. Repeat this over and over until he finally realises that this good behaviour gets him good things. I suggest placing a box beside your work area as most cats feel secure in a box. Address anxiety by establishing a routine in the household so your cat will feel safe. Set a playtime with him and stick to it. Address boredom by providing toys that can stimulate your cat both physically and mentally. Get him a cat tree or a cat tunnel or toys with catnip. If you have the space, build him a catio. His attention will be distracted by the sights, sounds and smells of the outdoors.

As long as you know that he is not hurt, he is fed, he is warm, do not give in to his manipulative attention-seeking behaviour. Do not indulge him in his game and if needed, move him to another room. If he stops meowing and behaves, reward him with treats and petting. He will eventually learn that bad behaviour will not get him what he wants, but instead being good will. 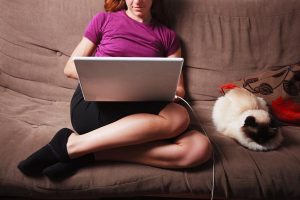 My Lestat is somewhere in between the needy and the demanding type. Although my cat won’t leave me alone, I can’t complain as I may have inadvertently contributed to his clingy ways. As a kitten he hurt his foot and I let him stay in my office and babied him for weeks. He would follow me everywhere and place himself on top of what I was writing or reading. To break his attachment to me, I removed him from my office and transferred him back home to the company of his brother Louis and their sisters. When I get home from work, I ignore him when he runs up to me to greet me. With this cold shoulder treatment, what Lestat would do is sit beside me in silence. I could see him throwing glances at me to see what I was doing. Then in my own appointed time I would call his name and he would immediately jump up on my lap. Hugging him to reward his good behaviour was effective and he would purr with happiness. I swear that when Lestat is on my lap, he gives the other cats a smug look as if to say, “See? I am mummy human’s favourite!”