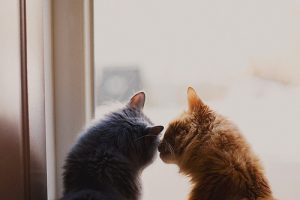 Ever heard two cats mating? If so, you’ll never forget the frightening call of the queen when the tom penetrates her.

What Occurs During Intercourse Between Cats?

A male cat has two openings under his tail. The one at the top is the anus, the one below hides the penis. To urinate a tom cat doesn’t need more than an opening. Only when he mates his entire penis comes out. The tip of the erected penis has sharp spines. These cause an intense stimulation of the female’s vagina, and that leads to ovulation. This is what happens when there are two cats mating. First they take their time to get to know each other better. The male will sniff the female’s genitals. If it smells well, he’ll stay with her. If she likes him, she’ll roll and present her hindquarters. 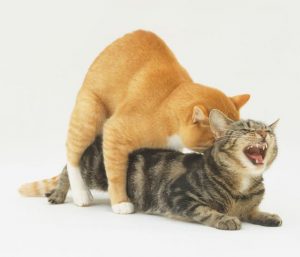 Then he will grasp her in her neck and mount her. She’ll twitch her tail aside. That’s the end of the foreplay of cats. Mating itself takes less than ten seconds. The tom will ejaculate, and the queen will make a frightening call, caused by the spines of the penis.

What Occurs After Intercourse Between Cats?

The tom cat will run away, sit down a few meters further and start to lick his genitals. The queen will roll on her back and clean herself as well. And then … they’ll repeat their lovemaking several times – often ten times in a row with intervals of less than a minute. Once they get tired, he’ll go away. If she stays out, she might meet another lover and … start again. It is important to ensure that your queen is healthy before setting her up with a male mating partner (and vice versa). Do everything you can to keep the female strong throughout her pregnancy. You may want to consider buying a water fountain for cats to ensure she remains hydrated throughout the period.